I think of myself as a writer—that’s the place I start, but before that it means being a reader. I start with other people’s writing, which could mean theory, philosophy, fiction, business books, adverts, tweets. I’ll end up in a relationship with a particular text, a specific chapter or passage, and I stick with it. Then my notes and thoughts on this morph into a piece of writing of my own, through edits—moving language about, colliding it with other found language. The mix assembles into a fractured text, which I’ll further edit and rearrange. It starts to carry a lot of voices and positions. This lends itself to the form of a script, which in turn lends itself to performance. That is how I ended up making performances.
So I guess I am an editor? Increasingly, I think of it as choreography though: arranging language across a page and then through a space, by placing text in a moving performer’s body. So, I think of myself as a choreographer too, because I am trying to create a movement in-between things.

CA: So you imagine yourself as using bodies and language equally.

CS: Yes. Except one requires me to be my most energetic, social, managerial. The other I can do at my most chaotic and introverted.

CA: Which part of your creative process do you most enjoy?

CS: Writing. Until I get sick of being alone and I can take the thing no further. It’s at that point I call people, and start rehearsals. The rehearsals turn into live events and after some time, I get depleted by being a manager of that live event, and how settled a project has become, so I revise the live event, often by filming it. Then I slip back into my bed to read, and write. And so it begins again. But I equally or more enjoy the start of rehearsals; trying to invent something from little, with a group of performers, who are strangers, but will eventually know each other very well. That is always a good moment.

CA: What variables do you consider when presenting your work, whether in a white cube, on a stage, or on an LCD flatscreen?

CS: I start with the space I’ve been allocated. I look at its variables, work backwards from the architecture, consider how an audience will move normally, and how they could move differently. Then I’ll bring this reality together with materials I am working with at that point; live performers, text, sound, light, heat…

CA: Is your background in film, theater, art school, or something else?

CS: Philosophy. In a school of Social and Political Science. Before this, I trained in a dance/theatre school for many years. So in short: background in social and political philosophy, some knowledge of being a performing body and no training in film. Except for my former day job as a pop music video producer.

CA: What are you planning for the Biennale de l’Image en Mouvement?

CS: Primarily sound. With a backdrop of mute moving image. The sound is live radio, a BBC sports commentator delivering Oprah Winfrey’s E.reader comments, and an alarm clock I was ‘gifted’ by Limelight Hotel, Aspen. It plays bedtime piano music. Every part is loose. Separate. It’s a constellation. The screen carries a film of three dancers. One performs a solo at the front of the frame, two try to drag each other across the back of the frame, in opposing directions. This moving image is called DRAG DRAG SOLO, 2016. Overall then, for Geneva, I’m assembling spin-offs and side-shoots from a long-term project I am working on called On False Tears and Outsourcing.

CA: How will this work be different than your recent exhibitions, such as On False Tears and Outsourcing at the New Museum in New York?

CS: It’s different and it’s also exactly the same. On the last day of the show at New Museum, I asked the six dancers, who were the main material in the show, to change to rehearsal clothes. Then they performed the work, which they’d generated during my two month show and I filmed them. I shot in a simple archival manner; straight take, sequence by sequence. My work for Geneva is not documentation of my New Museum show, which I accept is gone, and can’t come back. The Geneva project upsets a work that was starting to settle, whilst collecting and remembering some unexpected things that emerged. The sound also derives from my New Museum show; live radio, a 67-foot false wall of acoustic panels, broken down now. Further from ideas in an essay/interview I co-wrote with Hendrik Folkerts for my exhibition catalogue. So yes, it’s the same and yes, it’s different.

CA: How long does it take to “make” one of your exhibitions or productions? And when do you consider them “done”? I ask because you frequently develop projects over multiple exhibitions; you just mentioned that Geneva is building on the New Museum exhibition, and I know that that in turn expanded upon a project you presented at Vleeshal Markt in the Netherlands in 2015.

CS: On False Tears and Outsourcing has been various things: a Stanislavski training course for financiers, who learnt to produce real tears, on demand. That was in Holland (Vleeshal). A cooperatively owned, administratively built pop song, started at Vleeshal, evolving in Paris (Foundation Lafayette). The self organised dancers in New York (New Museum), and a novel (in progress). I have this feeling On False Tears and Outsourcing might become a performance company. I think everything I’m making now is research for that. Not only into the content and materials the company will use to devise work, it’s also research into management, to understand better leadership; the nuts and bolts of what my role would be. How can I make a company, and how can I lead that company in a way that is headless, leaderless? Do I even want to? How long this current project will take me to make, I do not know. Three years? Four, perhaps. Because last time I made a project it took two years, and this work is much harder, barely there, more fragile, and I need more time to think.

CA: What have you seen or heard lately that you can’t stop thinking about?

CS: A breakup letter written by Rodolphe Boulanger De la Huchette and sent by post, to his lover, Madame Bovary. The letter is signed with a single false tear; a water drop, administered from his drinking glass. Upon receiving his water-stained paperwork her heart breaks and she falls into irreversible depression, whilst he remains calmly unaffected, on the other side of town.

CA: How do you understand the term “moving images”? Especially in relationship to your own work?

CS: I am glad you asked that. I don’t make moving image in the sense of film. I mean, I am not—really not—an image-maker. You know how if you’re in the movies, you say you’re in the business of “making pictures”? Well, I have never made a picture. Not deliberately. I’ve always wondered why so often film scripts are really shitty and of course it’s because it’s about making images first. It’s the same in visual art—perhaps less so; there are so many language makers—but making images is very powerful in the visual arts still.

I have to start from language. I adore language; it’s the most sensual and bizarre and barely-there construct, and also this terrifyingly powerful force when it’s at its worst. I’m trying to understand how to use it elegantly. How to live in it, without it crushing all the life out of things and all the movement from the universe because it’s also such a terribly oppressive mediation, even when it’s not written. Especially when it’s not written, perhaps.

I am making moving images. But, first I’m trying to keep a live event restless – across an architecture, a museum, throughout a single straight-take film, in and through bodies. This creates ancillary form, the form creates an image. So there you have it: I make moving images, because I’m choreographing live events away from a stage, and because I am writing texts, off the page.

CA: So video and film figure in your work less as inspiration, and more as outcome?

CS: Film/video arrives to close down, build up, or reroute a live event. So yes! Outcome. Though rarely the outcome of an objective from the outset.

CA: Are there particular filmmakers you admire?

CS: Yes. But it’s easier for me to say – there are writers I admire and I try to adopt their approach to writing, as an approach to making film, or more specifically, to making work repeat and remake itself. So if we take that route – Gertrude Stein, specifically her essay Portraits and Repetitions.

CA: How do you conceive of the connection between video and performance?

CS: One is a vessel for carrying the other out of and beyond its natural limitations. Though not always, and not necessarily in the order you’d assume.

CA: Discussions about video art (and other reproducible media such as photography) frequently concentrate on issues of mediation. One way to think about mediation is as distance: bodies, objects, or platforms intervening between the artist, the artwork, and the viewer. The word between requires a spatial relationship. I’m interested in these ideas within your practice—for example your distance from the work and the viewer as an artist and not a performer. You don’t often perform in your own work. Could you talk more about that distance?

CS: Contra to the traditional historical precedent of the performance medium, I choose distance over presence and within that is my enquiry. I’m not a fabulator, I’m an instigator, then a manager, overseeing others from the wings.

Text, recorded image, bodies are all a media. There is distance between text and speech, a distance between the recorded image and live event, a distance between bodies hired to deliver my work, and my ideas. But I’m wondering whether I need to hold such drastic binaries. If the binaries are real, how wide is the distance between? Can I operate in the ambiguous moment these oppositions fold over each other, and muddy? A mediation, mediator or Medium bridges a distance – between that which you can say or do, and that which you can’t quite reach on account of it being too impossible, too far away (like contacting the dead, or being heard by a person who is angry with you and with whom you are angry, or reaching a remote island, accessed only through TV). Outsourcing may conjure a mental image of offshore call centres, but I’m considering it in the broadest sense: as how we delegate to a stand-in; to language engineered by bodies or institutions or industries outside of our own body, which have the power to organise our thinking, and provide us with their language and therefore do our speaking, thinking, even our emotional work for us.

In my work, I am becoming more mediated, less present, as I outsource my live events to hired bodies. Often, I rethink these live events into film. I mediate them more. I use techniques like single take, first takes, little or no editing. In doing so, permanent, fixed images arrive because an activity was filmed once, then left, but was not stretched beyond what it landed as. I am making work in a grey area; where live events sometimes becomes more, not less living because they have been mediated, and where I become more, not less, present because of my absence. This is about opening then closing the distances between what seems mediated, and what is is not; moving in-between. Keeping this movement in-between – a rehearsal of means, not endings – is what I’m mostly trying to do. 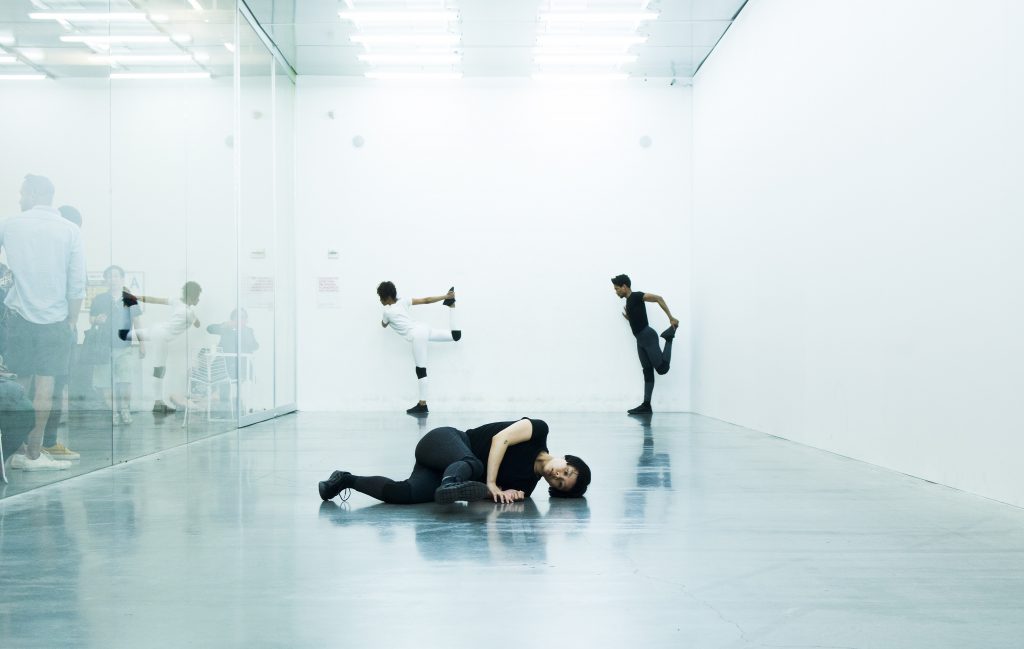 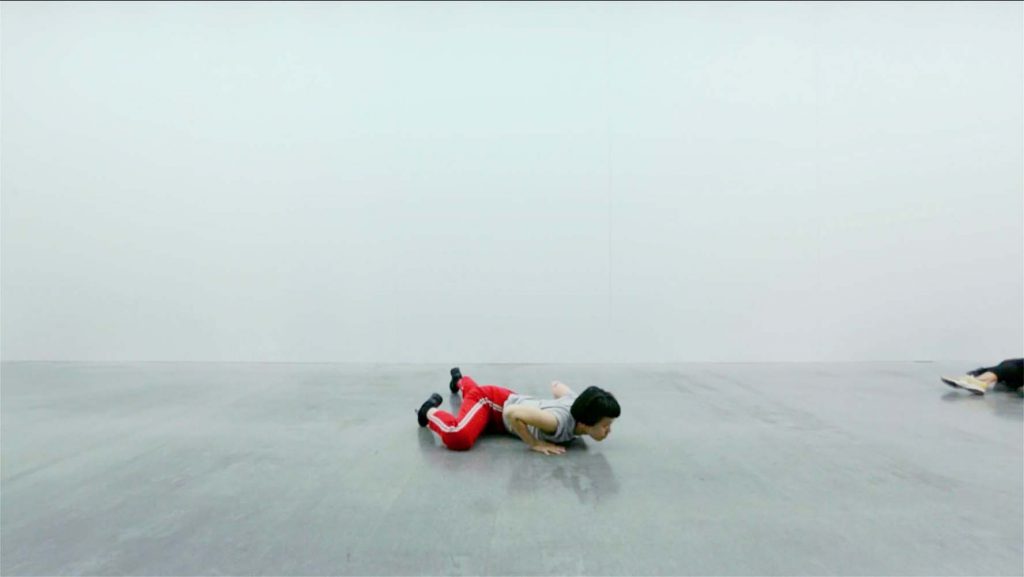 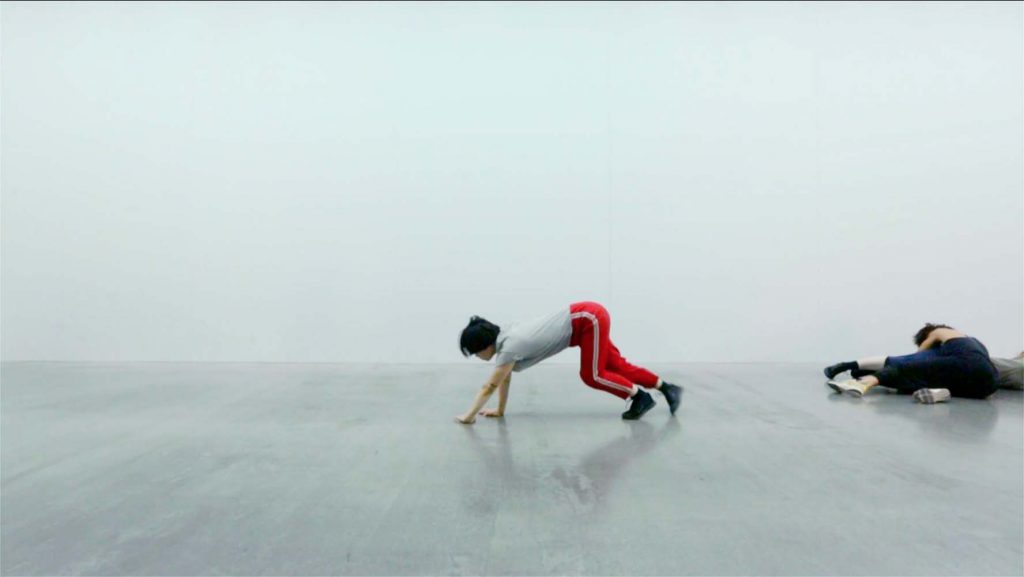 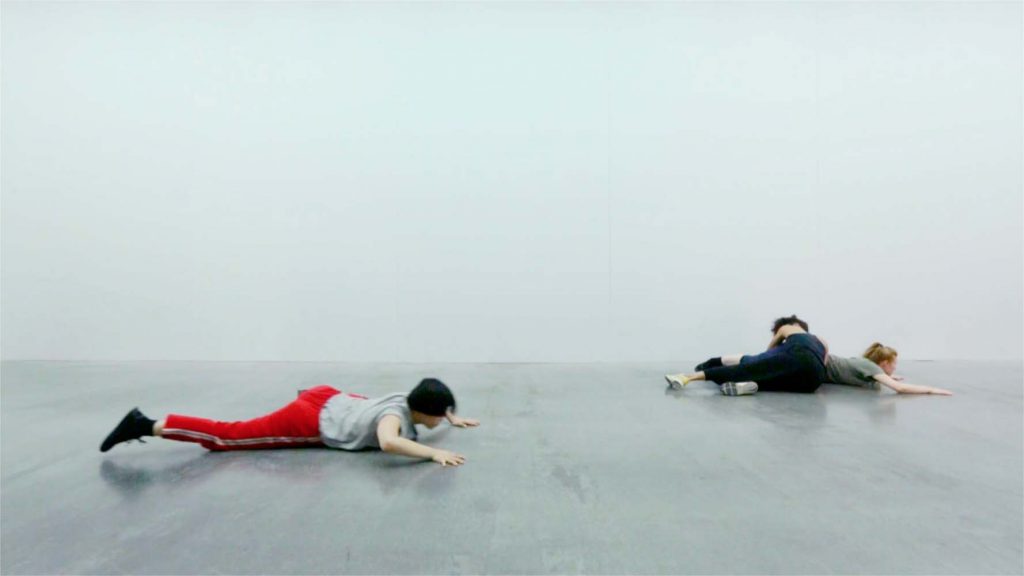 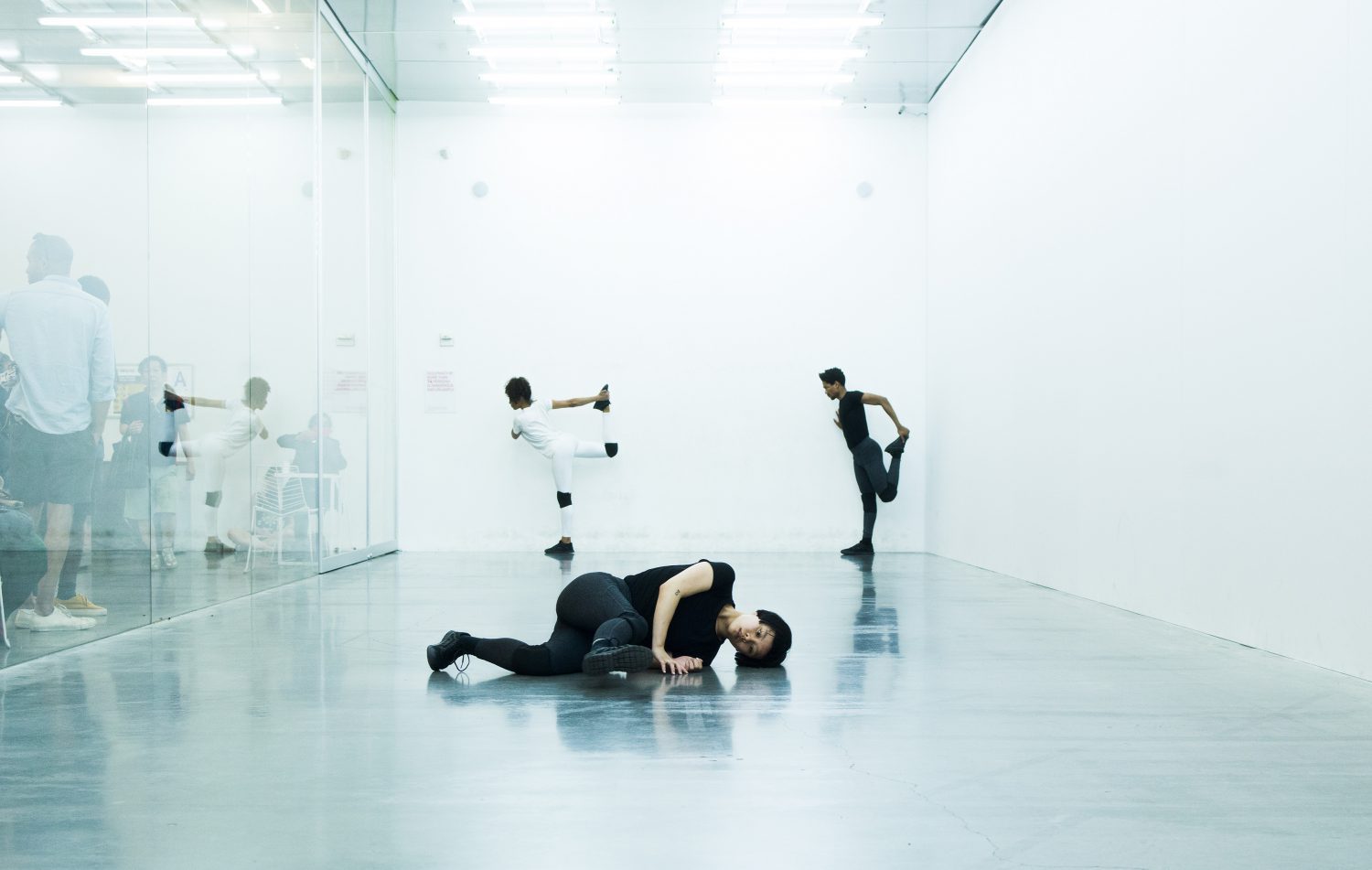 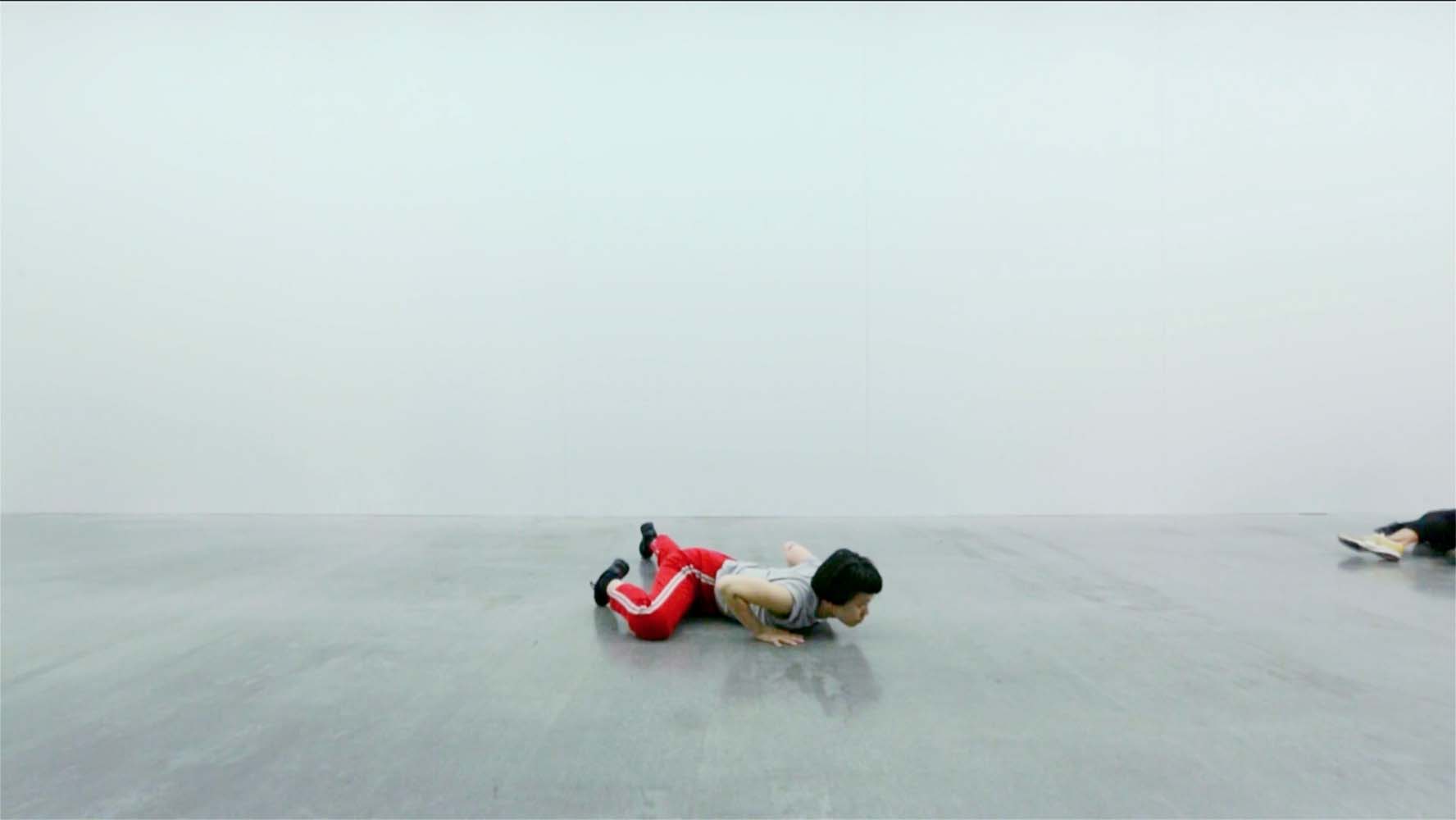 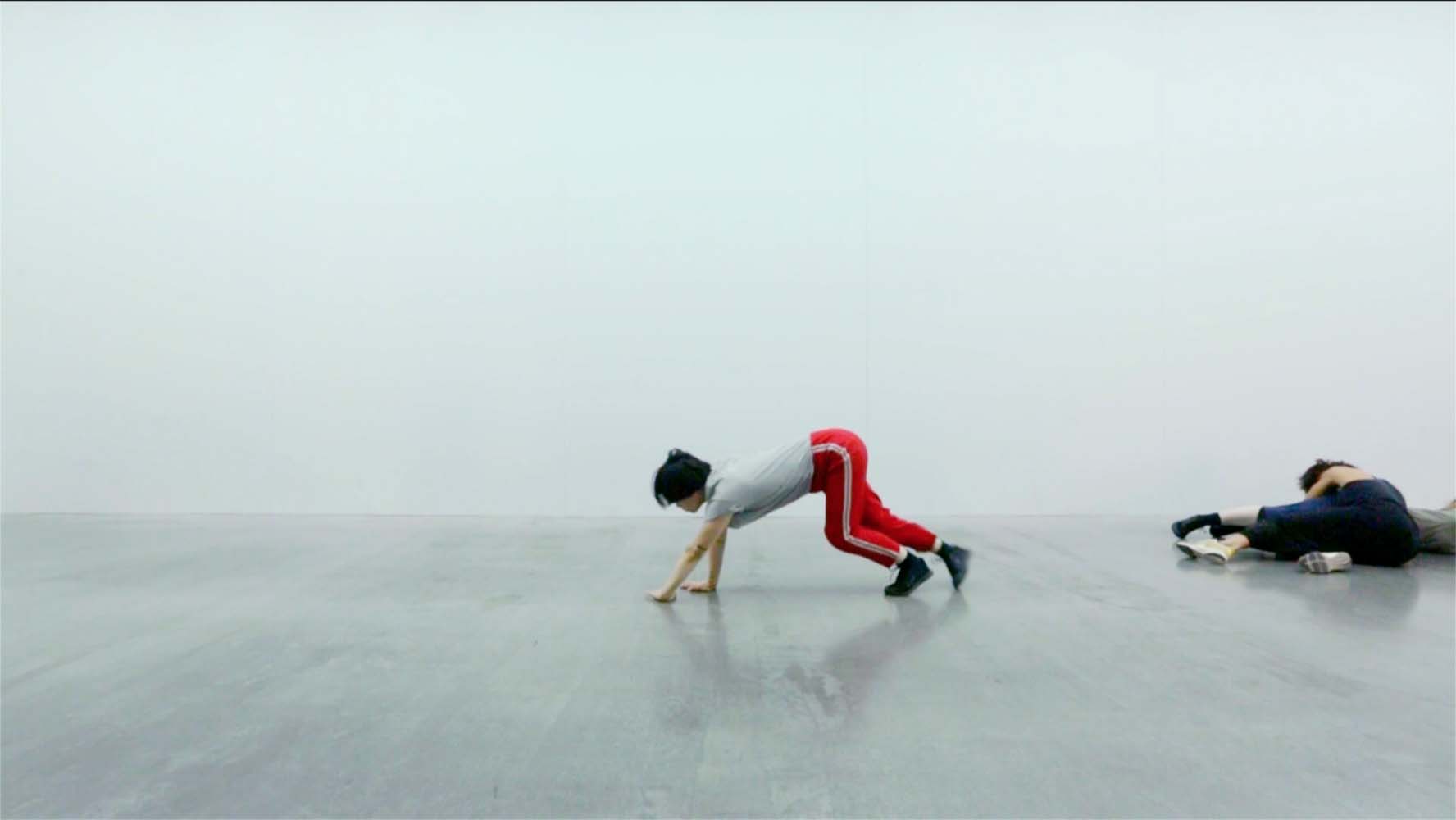 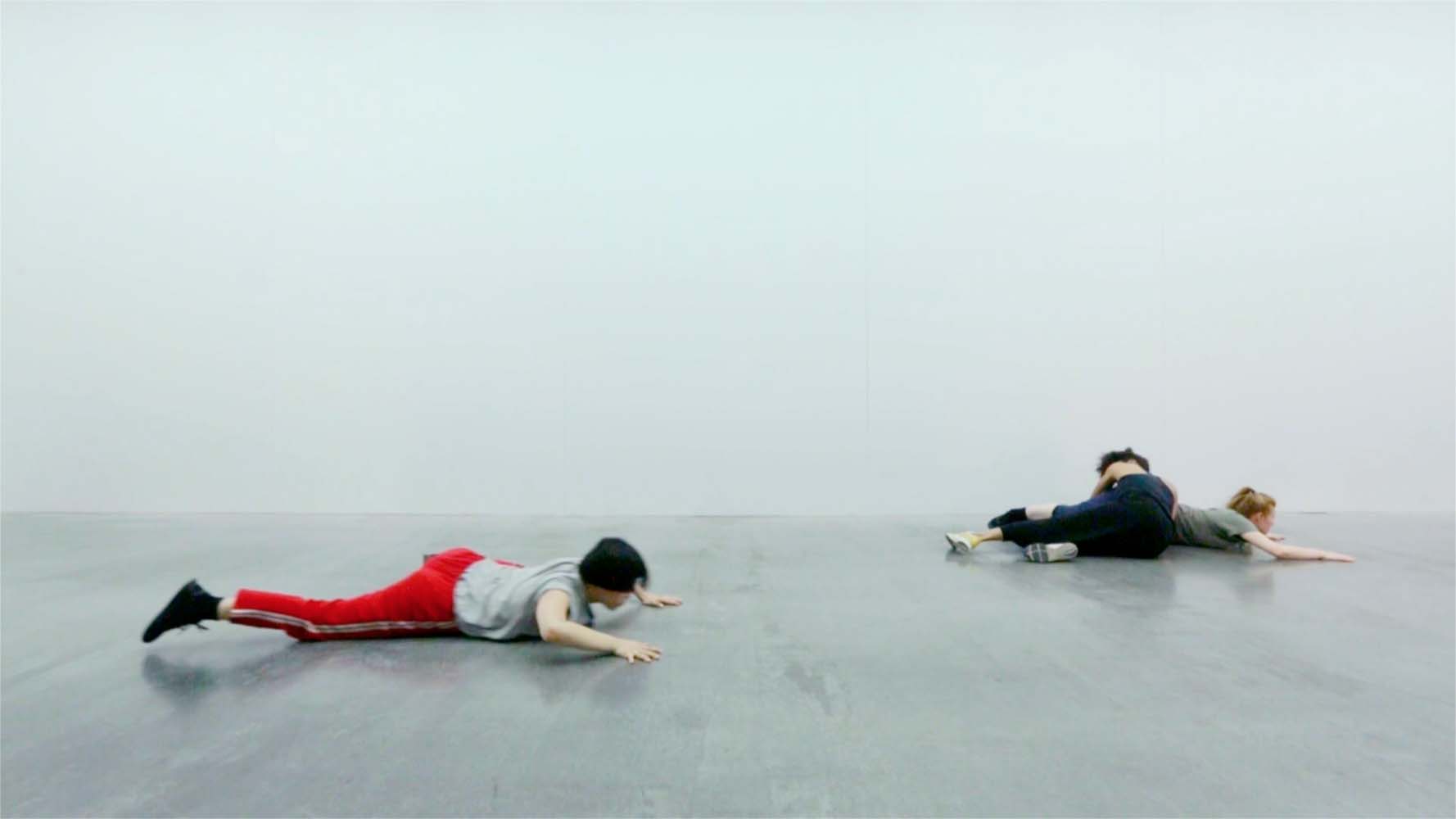