The focus of the project you prepared for the Biennale de l’Image en Mouvement is aboriginal tourism, that is, the way local people are used to heighten the “local” effect. Can you describe how this project came about?

I got to know Thailand more than ten years ago, and I’ve seen how the country has changed. Mass tourism has arrived, and it has become a top destination in Asia. The intrepid tourist is put up in a magnificent resort and presented with a choice of excursions, including the now-famous visit to a tribal village. Gradually, as interest in aboriginal tourism has grown, villages have been purpose built close to big cities. Different tribes, who never in actuality lived together, have been settled on the same narrow strips of land. Artificial human reserves like these exist as entertainment to satisfy tourists’ craving for the exotic, with a traditional meal thrown in, a dance, some crafted items, and a selfie taken dressed in typical fashion with the “savages.” The aboriginal person hangs around until the park closes at seven in the evening, then takes off the traditional costume he or she stopped wearing decades ago. This mode of putting communities on show gave birth to the project, which I call Usine à divertissement (Entertainment Factory).

CB: Do you think this amounts to denaturing local people and their environment?

BB: There are forms of tourism said to be sustainable or responsible, which, on the face of it, appear respectful of natural resources, of the environment, and of the people encountered, including their culture and their wishes. The trap many communities are caught in consists of being tempted by a handsome financial reward in exchange for putting their lives on show. But these people are in the hands of an alliance between the government and the tourism industry; they generally have no say whatsoever in the matter and don’t receive a fair share of the profits this business makes, even though the package is sold in a humanitarian wrapper.
This using of the other reaches right down into the foundations of the community, its rituals, its everyday life, and its traditional knowledge in order to give maximum fulfillment to holiday-goers eager for recreational leisure. I’m totally against initiatives that don’t involve local populations in the development of tourism. Tourism’s lack of ethics, its human rights violations, and its neglect of the right to self-determination are recurrent features in this field.

CB: In the film DEMAIN (TOMORROW, 2015) we see a solution to “global” problems in the guise of the revival of local politics, including a currency. Do you find this convincing? Are you trying to raise our awareness of these as real possibilities?

BB: Personally, I believe that new, alternative initiatives can only be effective if energies are pooled. It’s through awareness and collective action that the course of things can be transformed, that there can be hope of rerouting the conventional trails. But regarding my work, and despite it having been undertaken with groups of individuals suffering injustice, the aim isn’t to provide solutions or to initiate some kind of change; I have neither the intellectual nor the creative capacity for that.
It’s about describing the present and working with a collective to invent ways in which they can tell their story: showing the group what its internal riches are and being able to reshuffle them, deconstructing its own identity, transforming it, imagining its evil copy, and being aware, always, of what is being shown. Trying to get a group to consider how it is represented and the necessity for it to stand up tall.

CB: Since you started out you’ve been interested, at the core of your work, in “small” worlds whose existence we are barely aware of, communities that kind of slip between the cracks. How do you go about approaching them? Getting them to go along with you, if I can put it like that?

BB: In Usine à divertissement, which will be a video triptych, I started by meeting the people who live in a Lahu village in northern Thailand, on the Burmese border. The thing about this group is that they’ve set conditions for tourists visiting their community: limiting the number of visitors, for example, to a maximum of six, once a week only, so that it doesn’t disrupt their daily lives. I wanted to start the project with these people because they have the necessary distance with regard to tourism. But because they’re so suspicious of false representations of their culture and traditions, the problem was to bring them inside a structure that imitates the excesses of aboriginal tourism.

CB: How do you take the parody to which their culture is subjected a step further, graft additional layers onto it, and structure a sort of schizophrenia of the real?

BB: I had to do a full-on oral assessment in front of the leaders of the community’s six villages, as well as its internal legal, culture, and tourism ministers. By the following day, these eminent representatives had called on the villagers to take part in the project, using the different villages’ street-level megaphone systems. That was exceptional, that the project was already being set up the day after our meeting. But every story has its own tempo, and there’s no formula that can guarantee the group’s total commitment to the project.
It was a completely different experience for the second part of the triptych. I met the women who live in a mountain village in the Moroccan Rif. The roads that lead to this village are under construction, but on a daily basis the villagers now see tourists going by, perched on quad bikes. At the foot of the mountain there’s a big town whose landscape is filling up with huge bathing complexes. So, the jbalas (literally the mountain women) are not involved in the tourist circuits, but the invasion of holiday-makers all around the mountain offers a glimpse of this possible new business. After many, many meetings with the women of the village on this central issue of “how to traffic your identity in order to build a tourist trap,” we started shooting footage with some of the women—those who were unmarried and didn’t have any male children.
But after a silly rumor went around to the effect that I, a Western woman, had been filming them naked in the river, the women didn’t want to be seen in front of the camera any more. All the same, they didn’t want to pull out of the project, so, together, we found a way of continuing. The jbalas started directing other women playing them, lending them their costumes and organizing the rest of the villagers’ movements so that they didn’t disrupt the shooting.
The third part of the triptych, which has yet to get under way, will focus on a completely different territory, the Camargue, where certain new traditions were introduced less than a century ago. The rituals were codified at that time, as well as the festivals, the events with bulls and games on horseback. In this agricultural area, the local people became showpeople.
Today, I’m not able to predict how my intentions will be received by this new group. Each project is totally different from the previous one, and it takes time for it to be understood and fully engaged with.

CB: You have a highly developed sense of the collective. Why is that important for you, in the current climate?

BB: It’s easier for words to have an impact when they originate in a collective. They carry further, and team spirit becomes a genuine force for protest. Having been abroad all this year, I haven’t followed the civil protest movements in France very closely—the genesis and climax of the Nuit debout movement, for example. But it’s great to see individuals organizing on behalf of their ideals, without it being on behalf of any political party, on a nonhierarchical basis, fighting for everyone to have the same rights. The way the initial struggle against the labor law reform ended wasn’t a failure; on the contrary, the movement has been a reminder of the necessity for democratic action.
The collective question isn’t a simple one. My own artistic practice is always riddled with doubts regarding, for instance, how much “say” the groups I work with have. Because as well as being the initiator of projects in which the group takes part, I’m also the one who decides what is shown. Does that make me, in the end, another external element, conducting the way they’re put on show, assuming the power to reshape their present and turn their history into folklore?
And beyond that, specifically regarding this project, maybe I’m the counterpart in the tourism industry/art world graft, the person who comes up with new performances for the museum visitor with a yearning for the exotic. Because in the name of denouncing capitalism’s stranglehold and these human circuses, what we offer amounts, again, to putting their lives on show. Can I ever be sure that the initial intention and the means of achieving it have been fully assimilated, especially when communications take place via two translators? I’ve strayed somewhat from your question, but I do believe that the collective is a big force for countering the excesses of the powerful.

CB: What new projects do you have lined up?

BB: I spend a lot of time in Morocco, where I’m trying to develop a project with women factory workers. Their job: shelling little shrimps. These shrimps are caught in Holland, brought to Morocco to be shelled, and then go back to Holland to be sold. While issues to do with work and globalization are quite prominent in my recent projects, each time I focus my interest on a small group in a particular place. A big subject is viewed through the prism of individual stories. After that, I’m going back to the mining town where I did my first projects, a place in France called Barlin, for a video about its cemetery.

Translated from French by Simon Chapman 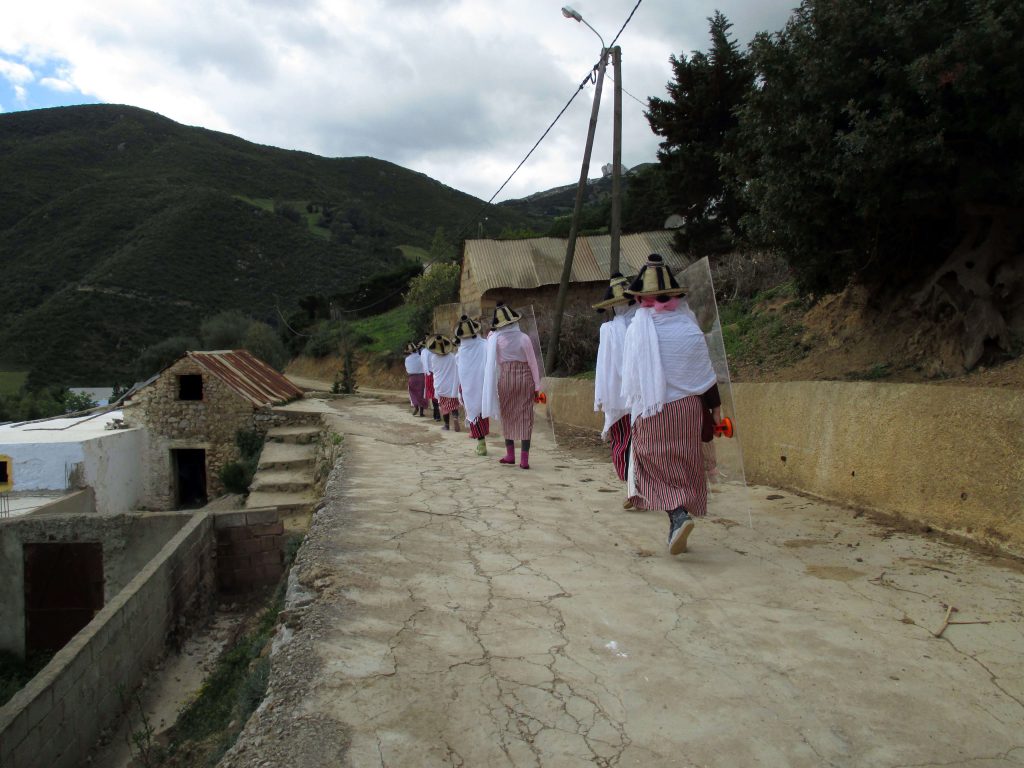 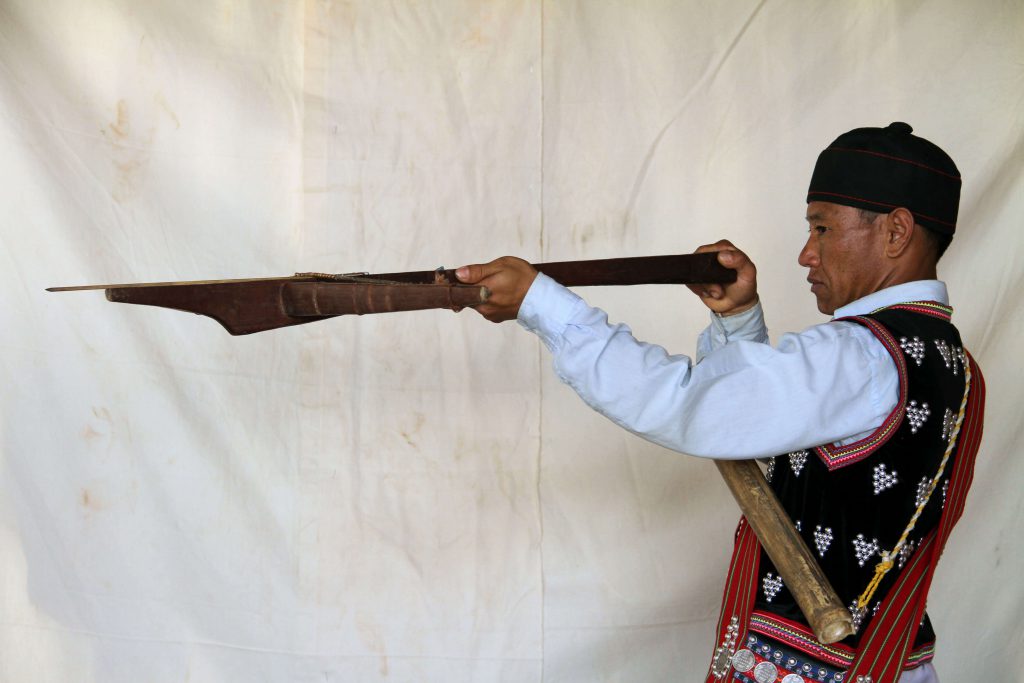 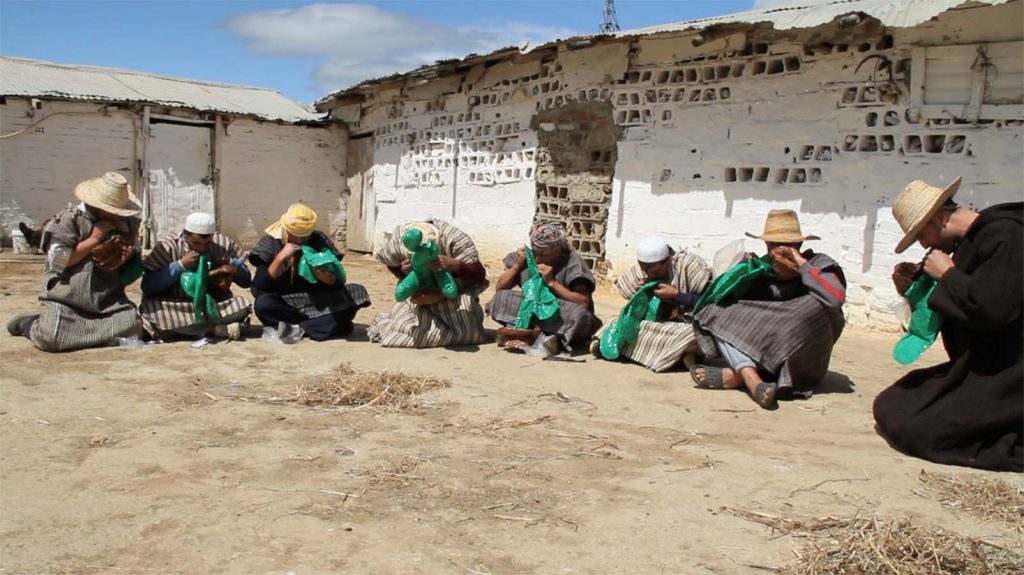 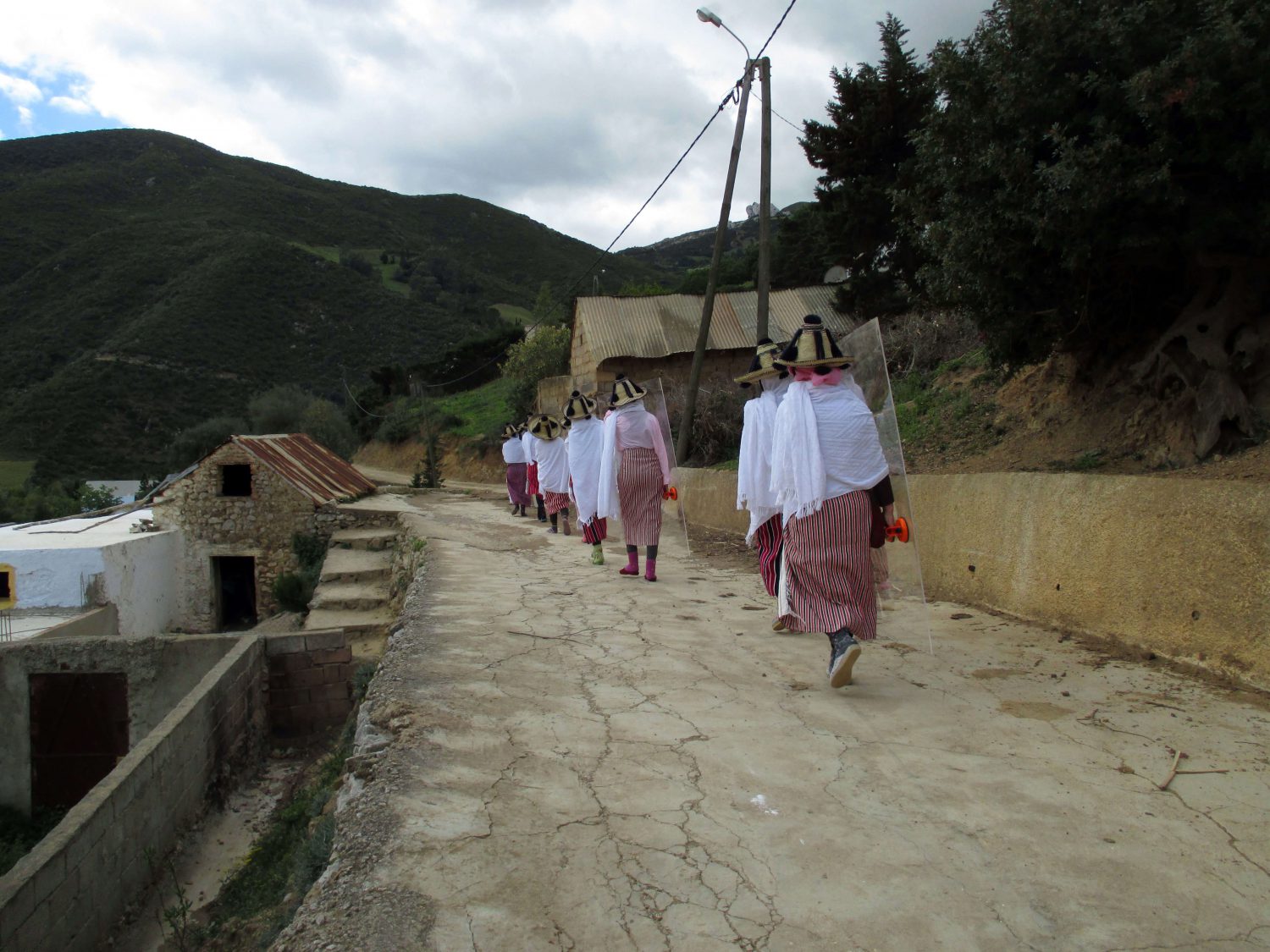 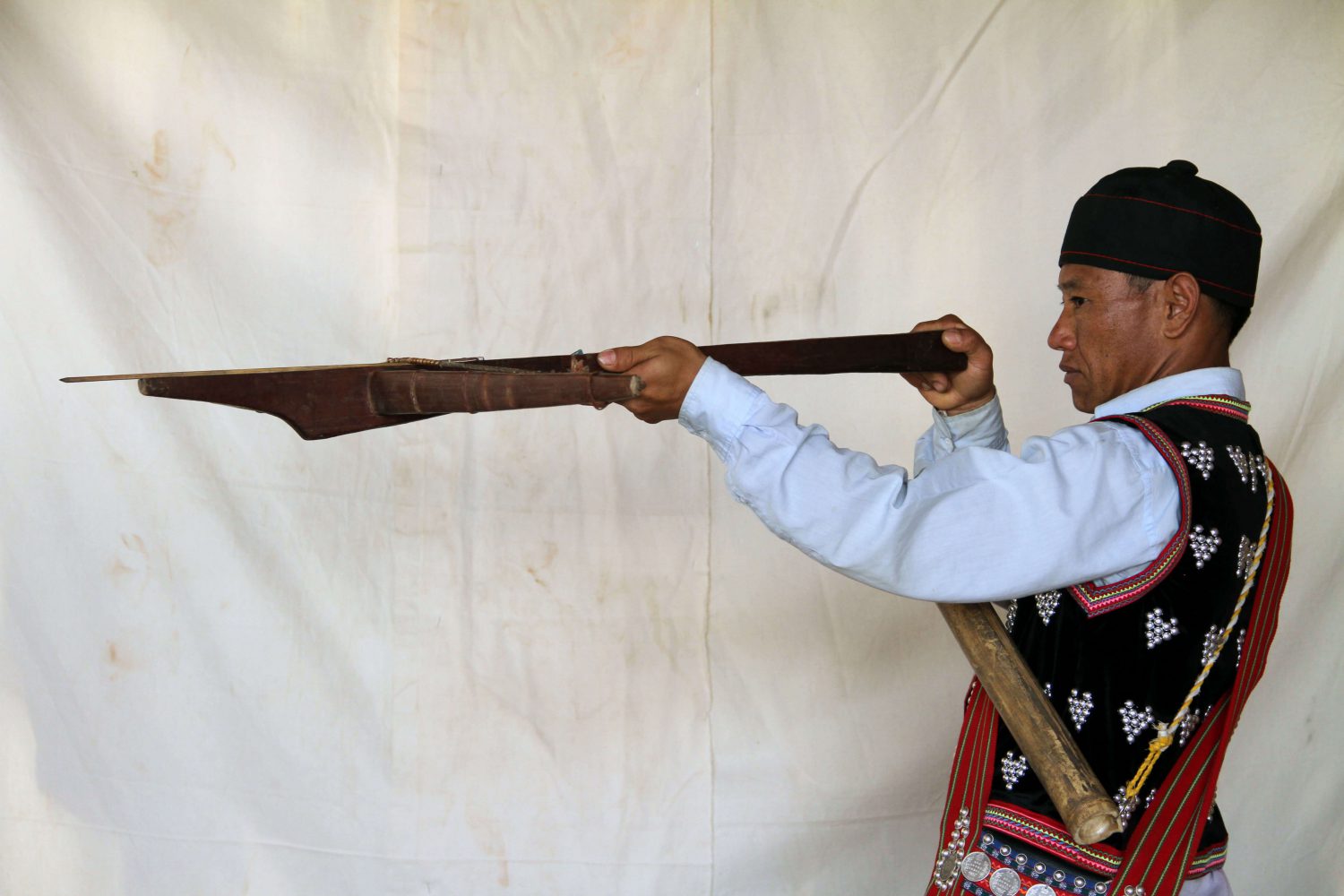 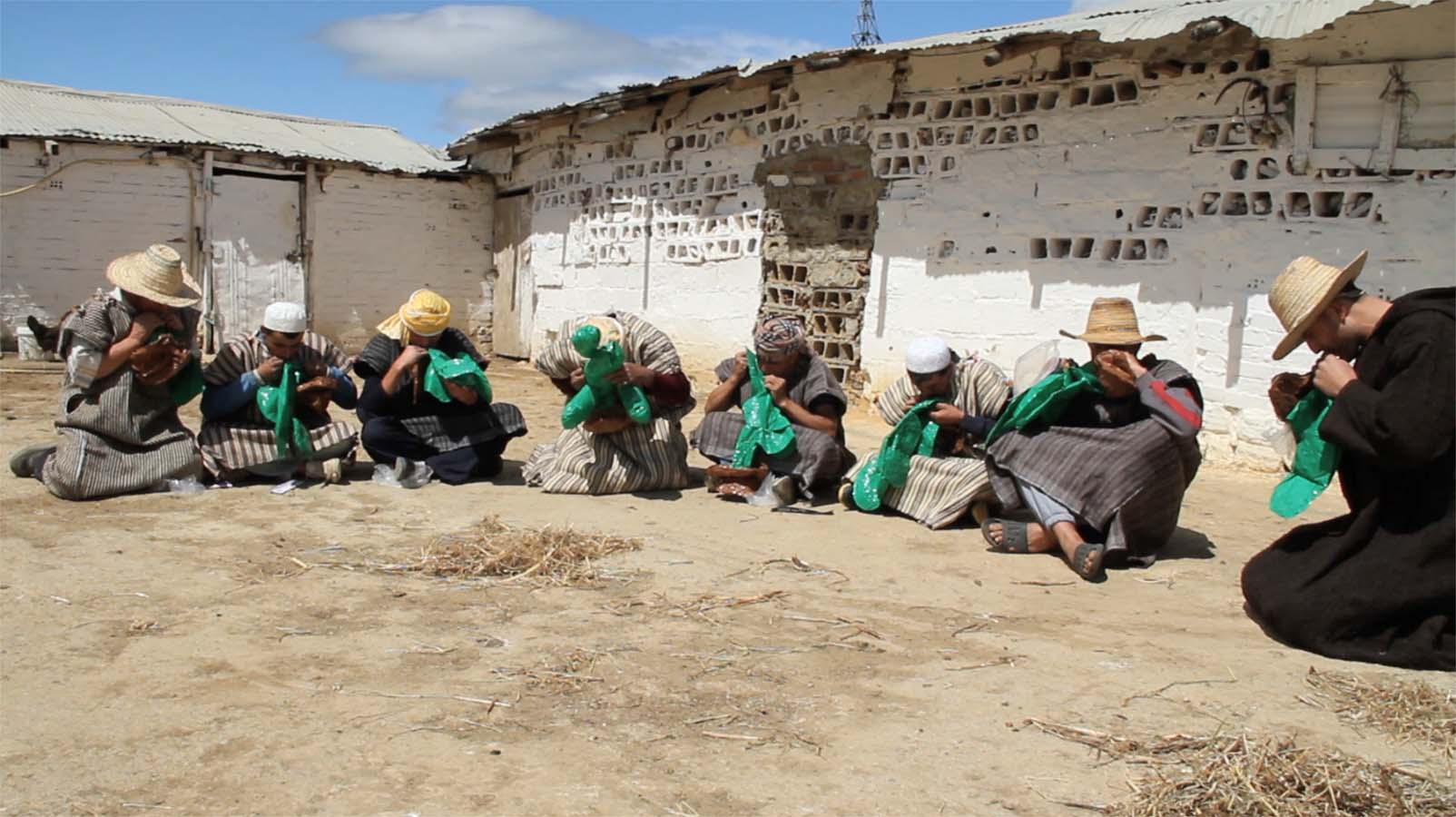